“Dreamy,” “awe-inspiring,” and “majestic” are just some of the words recreational anglers and other Block Island-based tourists and residents used to describe the Block Island Wind Farm in research on the wind farm’s impact on recreation and tourism.

Three social scientists leading the studies parsed that language and other data to assess whether the wind farm has benefitted or detracted from recreational fishing and tourism in Rhode Island and other nearby states. They discussed their findings recently at the Coastal State Discussion Series sponsored by Rhode Island Sea Grant.

With recreational fishing generating over $400 million in annual sales in Rhode Island, understanding the impacts of the wind farm on the industry is important, said Tiffany Smythe, an assistant professor at the United States Coast Guard Academy.

“This is a really economically, socially, and culturally important activity” in Rhode Island and southeastern New England, she said.

While anglers perceived the turbines as attracting a large number of fish, what makes their fishing experience a positive one is not only how many fish they catch on a given trip, but other, less tangible factors, like who they are with, the weather conditions while they are at sea, and the scenery at their chosen spot.

For many of the respondents, the wind farm enhanced that last aspect of a trip, adding both visual interest and serving as a target to aim for, without the need for a high level of navigation skill.

Nevertheless, not every respondent spoke positively about the wind farm, and even those who did noted reservations about whether the turbines would be beneficial in the long term, or whether increased fishing pressure could be harmful for the long-term sustainability of the fishery, and whether the increased traffic at the site—some of it from inexperienced boaters—was proving to be a nuisance, if not an outright navigation hazard.

“I like to fish alone,” Smythe reported one angler as saying, “And you just can’t fish alone there anymore.” Trips to the turbines for academics, students, and those with professional interest is part of the tourism economy of the Block Island Wind Farm. Photo by Meredith Haas

Trying to more deeply understand the nuanced, evolving, and sometimes seemingly contradictory feelings people have about the wind farm, the researchers variously read up on previously published research and news stories, conducted surveys and focus groups, and participated in some of the recreation and tourism activities to observe and speak with participants.

In describing the trio’s work, David Bidwell, assistant professor of marine affairs at the University of Rhode Island, said that understanding social impacts of the Block Island Wind Farm and their implications for future offshore wind development is important because offshore wind energy is slated to grow exponentially in the coming years. Rhode Island made a commitment for 400 megawatts from Revolution Wind, a project significantly larger than the 30-megawatt Block Island project. And the Bureau of Ocean Energy Management, which leases areas of the outer continental shelf for offshore wind development, has 16 areas leased to private developers for potential wind farms, many of which are proposed for the U.S. Northeast.

He said that industry projections show the U.S. will be among the top five countries for offshore wind capacity by 2030.

“People are pretty optimistic … this is going to happen. But are there potential risks?” he said.

Citing the story of Cape Wind, a failed project to develop a 130-turbine wind farm off the coast of Cape Cod, Bidwell said, “There is a growing awareness within the offshore community and within the renewables community as a whole that … if there are problems getting these projects built, it is likely going to be social opposition more than it is technical problems or financing.”

But he was critical of those who regard opposition to offshore wind farms as coming simply from “not-in-my-backyard” naysayers who understand the benefits of offshore wind but don’t support its development in their area. Social scientists, he added, are not immune to negative perceptions of wind farm opponents.

“Does [their] research assume that there is something wrong with people who oppose wind farms? That support for wind farms is, in some way, correct?” he said, adding that his work and that of Smythe and colleague Amelia Moore, also a URI assistant professor of marine affairs, and others at URI is trying to get a deeper understanding of the fairness of the process and the distribution of the benefits of the wind farm.

And those benefits are strong motivation for siting more wind farms offshore, particularly in the Northeast, where, according to a map Bidwell displayed, the most intensive wind resources are located along the seaboard. “This puts the energy resource very close to the demand in a highly developed part of the Northeast that makes it hard to site other things on land,” he said.

States are concerned about quality of life and recreation and tourism impacts, said Bidwell, and the Block Island Wind Farm serves as a “living laboratory” that can shed light on them.

Moore said that “our seasonal economies depend incredibly in maintaining qualities of coastal land and seascapes,” and described her research on Block Island, where the turbines are highly visible, as trying to understand how the wind farm has impacted those qualities by getting feedback from overnight visitors, day trippers, seasonal visitors, the tourism and recreation business community, and decision makers.

She noted that for some residents and visitors, “Block Island’s land and seascape is incredibly special to them and inspires deep feelings of attachment, but Block Island is also host to new visitors every year”—meaning that for some, the view of turbines is all they will ever know, and for others, the turbines represent “a massive change.” For those familiar with southern Block Island, the “view of the infinite ocean” no longer exists in that location. While many who were surveyed think of the turbines as “graceful,” others, especially seasonal residents, say the “black night is ruined.”

Beyond its visual impact, the wind farm is an attractant of a sort, Moore said. “All manner of visitors noticed the wind farm and many have taken opportunities to view it – ferry tours, charter boats, helicopter tours added extra time to fly over turbines.” And folks like Moore and her colleagues—researchers, as well as students and green energy enthusiasts—made special trips. 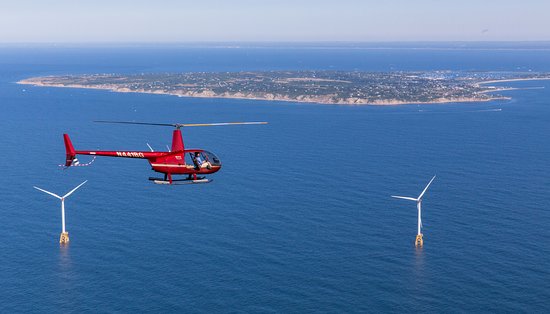 Some Block Island businesses, such as helicopter tour companies, have added the turbines to their itineraries. This photo of Heliblock is courtesy of TripAdvisor.

Some businesses have capitalized on this, but many have just added it to list of things for visitors to check out while they are on the island, signaling some ambivalence, Moore said, about people’s long-term feelings about the wind farm. In fact, she added, the Block Island Tourism Council chose not to promote the wind farm as a tourist attraction due to concerns over online trolling by the anti-wind movement.

Most visitors, she said, did not know a lot of current facts about the Block Island Wind Farm unless they were on a guided tour. In fact, one of the discussion attendees asked how much of Block Island’s electricity comes from the wind farm (when the turbines are spinning, all of it, answered Moore).

“We heard a lot of people speculating that if a turbine wasn’t spinning, it must be broken,” she added, noting that this was not the case, but that such misinformation might cause people to have negative perceptions of wind farms. The researchers did not find a lot of information available on the island, such as brochures, regarding facts about the wind farm. “This might be a missed opportunity to educate the public.”

While her research captured people’s feelings at a moment in time, Moore cautioned that the relationship of residents and visitors to the wind farm is evolving. “Throughout its development, the Block Island Wind Farm was controversial – very few people suddenly had feelings about wind farm after it was built…they were influenced by process.

The process does not end once the turbines are built,” she said. Wind farm developers and decision makers should be aware that inclusion in the process must continue and improve or members of the community can develop negative feelings about existing and future wind farms. And in the meantime, new stakeholders continue to emerge and should be included in these processes as well.

The researchers cautioned that their results from studying a “boutique” wind farm like the Block Island Wind Farm might not be replicated for larger projects that are further offshore. But they said that study of impacts for those projects should begin before the construction of the turbines in order to establish a baseline.

Some of the research projects are continuing with further surveys and interviews to delve more deeply into recreational anglers’ perceptions of the Block Island Wind Farm and their feelings about the proposed development of additional offshore wind farms in the region.

Related news: In 2018, the American Wind Energy Association and the Special Initiative on Offshore Wind, based at the University of Delaware, released a video with underwater footage of marine life at the Block Island Wind Farm and testimonials of recreational fishermen and charter boat operators: